May 03, 2010 in Articles and Publications Other 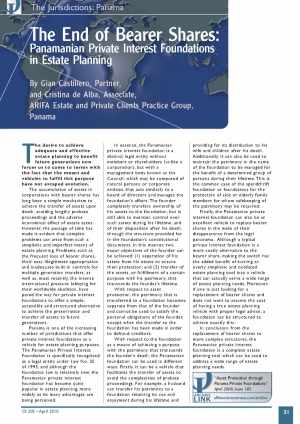 Since its launch in 1985, Offshore Investment Magazine has reported and analyzed the continuing changes transforming the world of offshore finance for over two decades, thus creating a universal communicator for the senior professional in the offshore finance world.

In its Issue 205 – April 2010, Gian Castillero and Cristina de Alba promote Panamanian private interest foundations demonstrating how they can be utilized as estate planning vehicles in the wake of new laws in numerous jurisdictions that are abolishing and forbidding the use of bearer shares.

ARIFA’s contribution is reproduced with permission from the Offshore Investment Magazine as an added benefit for its clients.

To access the Private Area of this site, please Login